Best Cities to Live in for Nursing: The Mid-Atlantic 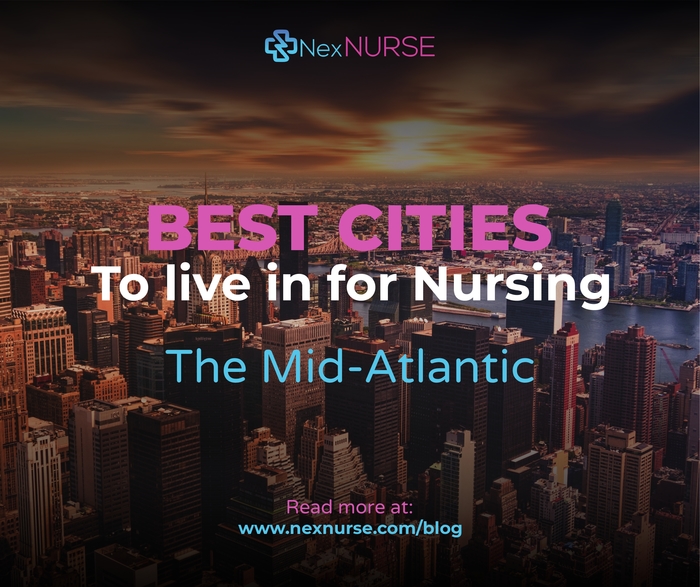 Nurses are needed in every city across the country. But what are some of the cities that stand out the most for work or what they have to offer residents? This post continues our Best Cities to Live in for Nursing series by focusing on the Mid-Atlantic. Here are five cities to consider working in as a nurse.

Washington D.C, is an interesting place to work for nurses because it has so many sights to see and is historically rich. Major hospitals also exist here, including Children’s National Medical Center, George Washington Hospital, and MedStar Washington Hospital. Washington D.C. is also known for the John F. Kennedy Center for the Performing Arts, the National Symphony, the Smithsonian, and nationally ranked universities.

Home to the Johns Hopkins University and Hospital, Baltimore attracts medical professionals from all over the country including nurses. The city has many things to offer including good seafood. With its moderate climate, Baltimore’s plant and flower life flourish at the Sherwood Gardens and Cylburn Arboretum. The city is also known for events in the summer months like HONfest, concerts, and other events.

Delaware is poised for healthcare growth in the coming years. 20% of its population is currently over the age of 65. This means that part of this population will need health care. Kent County, which is close to Dover, will see a lot of growth. Dover itself has hospitals like Bay Health and the VA in it.

Philadelphia is another place nurses turn to for work because of the hospitals located there. There’s the University of Pennsylvania Hospital System, which has three hospitals in the city. And the city is home to both the Children’s Hospital of Pennsylvania and St. Christopher’s Hospital for Children. The added cultural and historical sights the city has to offer don’t hurt either.

Princeton is one of the best places to live in New Jersey. It’s an option that people consider for health care work in general due to employers like Bristol-Myers Squibb and Johnson and Johnson. The Princeton Health System is here as well, offering many opportunities for nurses.

If you’re looking for your next hire or your next job in the Mid-Atlantic region, head over to NexNurse. We connect employers and job seekers across the country. Create your free profile today!